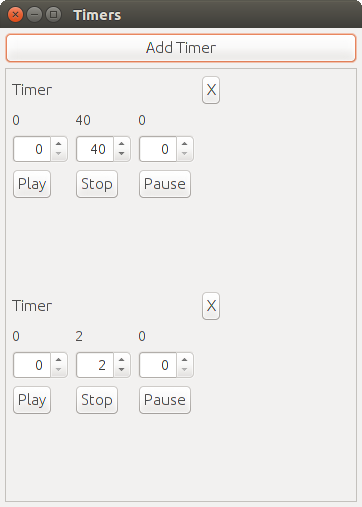 Recently, I’ve been working on a desktop application that let’s you manage multiple timers. It’s at the point where it’s ugly but it works, so I’m going to share what I’ve learned so far.

Using core.async For Timing And Control

In this application, I have two kinds of entities:

The following code comes from the play! function of the timer, and this gives each running timer its own go-loop. It multiplexes between a control channel and a timeout channel, and while it counts down ever 100ms, if a control message like :pause or :stop comes in, then the loop ends (because we don’t recur anymore).

Playing audio with Clojure was a bit harder than I expected. At first, I was going to use Overtone, but it tended to crash when I suspended my laptop, so I looked around some more, and I came across clj-audio. It was lightweight, and did exactly what I needed, but it had suffered some bitrot and no longer worked with contemporary versions of Clojure.

There was a pull request by wmealing that fixed this, but it was never merged back in by upstream.

I ended up forking the official clj-audio, merging in wmealing’s work, resolving the conflicts in that merge, and then uploading my fork to clojars.org.

seesaw Is A Great Wrapper For Swing

For the UI, I ended up using seesaw by daveray. It’s a really nice wrapper around Swing that significantly reduces the pain of creating UIs with Swing. He has a good understanding of both Clojure and Swing, and API he created is declarative and pleasant to use. It’s also documented fairly well, and there are a lot of examples in the github repo to learn from.

Something else I came to appreciate was MigLayout which is a 3rd party layout library for Swing. Seesaw provides wrappers around this too, but it’s barely mentioned in the seesaw documentation. However, I noticed mig-panel was used a lot in the example code and there’s a good reason why. It works great.

MigLayout provides an expressive textual DSL for describing widget layouts. It also provides the freedom to not care about the layout so much. I was paralyzed for a few days, because I kept thinking about how I should organize the widget for each individual Timer, and my greatest fear was, “What if I changed my mind?”

With MigLayout, I can change my mind all day long, because the layout can be changed relatively easily without massive code changes. If any of you out there end up using seesaw in a project, definitely look in to MigLayout. Although Swing has fallen out of fashion, MigLayout provided a great solution to a difficult problem, and I want to give credit where it is due.

Using add-watch To Update The UI

add-watch is a function that lets you observe a Clojure reference (like an atom) and run a function when the reference’s state is updated. I wrapped all my Timers in atoms and I used add-watch to attach a function to update the UI whenever a Timer changed. It was convenient.

Using future To Prevent The UI From Blocking

One minor problem that I faced was the UI becoming unresponsive while audio was playing due to clj-audio.core/play! being a synchronous function. To make the Alarm more responsive to stop signals sent to it, I ended up using future to play the audio in a separate thread. This allowed the go-loop used by each Alarm to stay responsive.

I would like to get the advice of more experienced Clojure programmers on the following topics.

Naming - I have 3 entities: Timer, Alarm, and App. I gave each of them their own namespace, and in that namespace there is a record of the same name.

The one that bothered me the most was timer.timer/Timer. Could I have organized my namespaces differently to avoid that unfortunately repetitive name?

Another naming question I had was about passing atoms around. At first, I was tempted to prefix variable names with a to signify that I intended for that variable to contain an atom. Later, as that got to be annoying, I stopped doing that, but I felt things could become ambiguous at times. Does the variable contain an atom or the raw record?

When working with atoms and other reference types, is it recommended to name them differently to signify that they are references and not plain values?

Mutation - Before I started, I wondered how I could organize the timer loop such that I didn’t have to mutate things, but that just seemed awkward. Am I swap!ing too much in this code or is it a reasonable amount?

Any insight is appreciated.

I'm currently taking a break from work to study things.